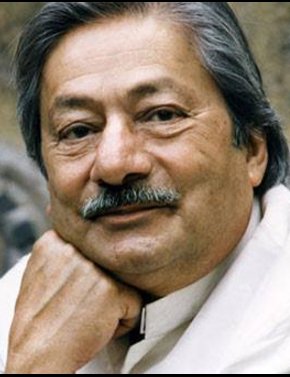 Jaffrey was born in Malerkotla, Punjab, in the princely state of that name, to a Punjabi Muslim family. Jaffrey attended Minto Circle at Aligarh Muslim University, Aligarh[2] before going on to Wynberg Allen School, St. George's College, Mussoorie,and Allahabad University.[citation needed]
He began his career by setting up a theatre company called Unity Theatre, at New Delhi. His early theatrical work included roles in productions of Tennessee Williams, Christopher Fry, Wilde, and Shakespeare. He studied at the Royal Academy of Dramatic Art inLondon and gained a Fulbright scholarship in the United States, leading to a second post-graduate degree in drama from The Catholic University of America.[citation needed] His first wife was the actress and TV chef Madhur Jaffrey (divorced 1965). They have three daughters Meera, Zia, and Sakina Jaffrey, who is also an actress.
Jaffrey worked with actors including Sean Connery, Michael Caine and Pierce Brosnan. He starred in popular cinema directed by Satyajit Ray, James Ivory and Richard Attenborough.[citation needed] He was the first Indian to take Shakespearean plays on a tour to theUnited States.[3]
He was also the first Asian to receive British and Canadian Academy Awards nominations, and also the first Indian to receive the Order of the British Empire (OBE) for his contributions to drama. He also served as the Radio Director (1951–1956) for All India Radioand Director of Publicity and Advertising at the Government of India Tourist Office, U.S (1958–1960).[4]
Jaffrey died on 15 November 2015